Portes Paranoia is the most complete backgammon game (Portes variation) in Android.

It is currently is in alpha testing, so we ask for your understanding for any inaccuracies and imperfections.

A player has a door in a position when he has two or more checkers in it. (From there it is considered that the doors got their name). It is generally not allowed to stand checker on the opponent’s door. The doors act as an obstacle to the opponent’s movement but also as “presses” for a player to place his checkers safely.

The doors are set up as in the picture on the right. The black of the image sits at the bottom while the red at the top. Each player has the starting area opposite him and the pick-up area on his side, with the pick-up area of ​​one player being the starting area of ​​the other. One player moves clockwise (red in the picture) while the other (black) moves counterclockwise, ie counterclockwise. According to the contract set out in the Backgammon Rules article each player has:

When a checker is alone in a position (not a door) the opponent has the right to move his own checker in that position by hitting the opponent checker (always according to the rules of movement). The hit checker is removed from the board and placed on the middle bar of the backgammon by the opponent

When a player has one or more checkers hit, he is not allowed to make any other moves before putting back the checkers he has on the middle bar.

In case the opponent has doors in all six positions of the starting area (the so-called “six-door”), no dice can allow movement and logically it is not necessary for the player to roll the dice, but simply gives his turn to the opponent until to free him at least one place.

A player can start picking normally when all his checkers are in the pick area. However, if during the pick-up the opponent hits a checker, he is not allowed to continue the pick-up before bringing it back to the pick-up area.

At the doors as well as at the board and the escape it is obligatory to complete a roll as long as this is possible.

In Greek doors the games are normally single or double as described in the article of the general rules but in the western backgammon there is also a triple game rule (the one who loses, loses three points when he has not left his starting area or when he is “hit” checker) and the screw (doubling dice) that acts multiplier. 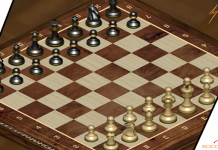